Moshé Feldenkrais is a master in judo, holder of the Black Belt, and author of several books in this field. Dr. Feldenkrais is also an influential kinesthetic therapist and theorist. This exposition of Feldenkrais’ ideas and techniques of movement-training is taken from two of his essays, “L’Expression Corporelle” and “Mind and Body.” This material is interspersed with selections from an interview with Feldenkrais by Richard and Helen Schechner in Tel-Aviv during June, 1965.

Dr. Feldenkrais uses “body image” and “self-image” interchangeably; he claims that there is no valid distinction to be made between the “self” and the “mind-body.” I have followed his not-quite-arbitrary usage.

This exposition suffers, no doubt, from brevity. No attempt has been made to offer the available (and substantial) supporting demonstrations, argumentation, and data. Feldenkrais’ concerns and practice are clearly applicable to theatre training; and, although he does not allude to it here, he has worked with the Habima Theatre in Israel.

“My fundamental contention is that the unity of mind and body is an objective reality, that these entities are not related to each other in one fashion or another, but are an inseparable whole. To put this more clearly: I contend that a brain could not think without motor functions….” 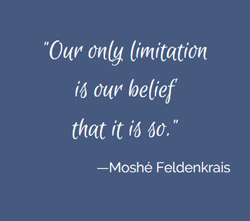