“Judo is the way to the most effective use of both physical and spiritual strength. By training you in attacks and defenses it refines your body and your soul and helps you make the spiritual essence of Judo a part of your very being. In this way you are able to perfect yourself and contribute something of value to the world. This is the final goal of Judo discipline.” —Jigorō Kanō

Moshé Feldenkrais was born in Russia in 1904. He left home at age 12 and immigrated to what was then Palestine. He supported himself during his high school years as a construction worker in Tel Aviv, and as a tutor to failing students.

He developed great interest in hypnosis and autosuggestion, taught himself and others self-defense techniques, played soccer, and was a weight lifter.

As a young man, Moshé Feldenkrais was looking for a way to provide Jewish civilians living in what was then Palestine a way to defend themselves against the periodic massacres and killing of Jews by the Arab population. He taught himself Judo from a book he found and taught classes in self-defense.

In the early 1930’s, Jigorō Kanō, the creator of Judo and the Minister of Education of Japan at the time, came to Paris looking to find a white man to train in Judo with the intent to open the first Judo club in Paris, France. 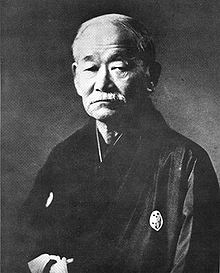 “In his professional life, Kanō was an educator. Important postings included serving as director of primary education for the Ministry of Education from 1898 to 1901, and as president of Tokyo Higher Normal School from 1901 until 1920. He played a key role in making judo and kendo part of the Japanese public school programs of the 1910s.

Kanō was also a pioneer of international sports. Accomplishments included being the first Asian member of the International Olympic Committee (IOC) (he served from 1909 until 1938); officially representing Japan at most Olympic Games held between 1912 and 1936; and serving as a leading spokesman for Japan’s bid for the 1940 Olympic Games.” 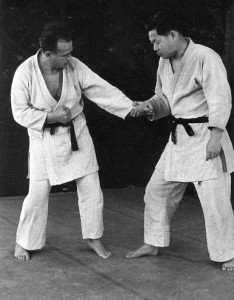 Moshé Feldenkrais gave Jigorō Kanō a book that he wrote on self-defense. In this book, there was a self-defense move that Dr. Feldenkrais developed specifically for being attacked by a short knife, which was a common way that Jews were attacked and killed at that time.

Kanō realized that he had never seen this move before. When back in Japan, Kanō had his people check that this was an original movement created by Dr. Feldenkrais. When this was confirmed, he selected Dr. Feldenkrais to be the white man who would be trained by one of the original 12 black belts whom Kanō had trained.

In 1936, Moshé Feldenkrais received his black belt in judo.

See the name of the club on the envelope below from correspondence that he received from Jigorō Kanō. 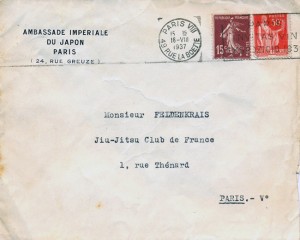 Below, see the copy of a letter that Moshé Feldenkrais received from Jigorō Kanō. 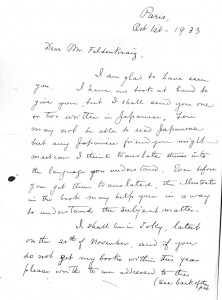 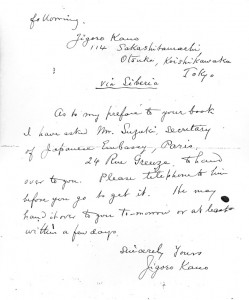 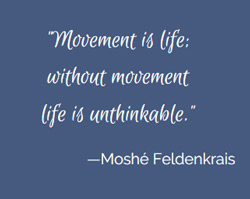