Moshé Feldenkrais (1904 – 1984) was a pioneer and giant in the mind-body field and is arguably one of the most brilliant teachers and healers of the 20th Century.

This website is dedicated to my mentor, colleague, and friend Moshé Feldenkrais—his life and his work. —Anat Baniel

Moshé Feldenkrais and His Method

Moshé Feldenkrais, D.Sc., was a nuclear physicist and engineer, and had a black belt in judo. He pioneered a learning system of movement lessons, which utilize movement and awareness of self to bring about remarkable changes in the human brain, body, and mind.

The Importance of Brain Plasticity

Moshé Feldenkrais was way ahead of his time in realizing that the brain can change itself throughout life. He understood that in order to overcome limitation and pain and achieve breakthroughs in one’s life, it is the brain that needs to change and learn.

Movement and awareness were the two main tools to accomplish these positive changes. He based his method on brain plasticity long before the term even existed.

Today, more and more of scientific research and theory is catching up and validating Moshé Feldenkrais’ understanding of the brain as a large, nonlinear, dynamic, self-organizing system.

The Creation of the Method of Dr. Feldenkrais

In the 1940s, Moshé Feldenkrais suffered a debilitating injury to one of his knees and asked the million dollar question:

Can I retrain my brain to do all that I could do prior to my injury?

Can my brain create alternate patterns of movement so that despite the severed cross ligaments in my knee, I will be able to continue my judo practice and everything else?

After reading all the books he could find on anatomy, physiology, and neurology, and completing all the basic medical school courses, Feldenkrais realized that there was no answer on how function was learned and formed.

Dr. Feldenkrais began experimenting on himself, using movement and the ever-growing awareness of the relationships between movement and change. And he realized that the answer to his million dollar question was YES.

This was a process that he continued doing throughout his life. He was able to retrain his brain and and was able to resume judo practice and moving freely without surgery. (At the time, surgery would have left him unable to walk.)

This process led Dr. Moshé Feldenkrais to discover a whole lot more than he bargained for, including the creation of his Method. 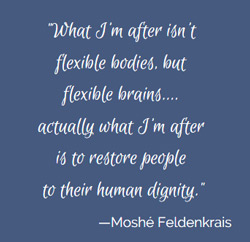 A Story About Dr. Feldenkrais

Read how Dr. Feldenkrais taught the Prime Minister to stand on his head. Click here. 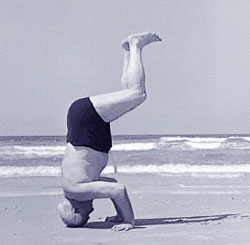